Home Uncategorized Biofloc Fish Farming , Biofloc Fish Culture
Spread the love
Biofloc Fish Farming , Biofloc Fish Culture
It is an innovative and cost-effective technology in which toxic substances for fish and shellfish such as nitrates, nitrites and ammonia can be converted into useful products, that is, protein foods. It is the technology used in the aquaculture system with limited or zero exchange of water with high storage density, strong aeration and organisms formed by bioflock.Bioflock will be fruitful in the case of sun-exposed crop tanks. 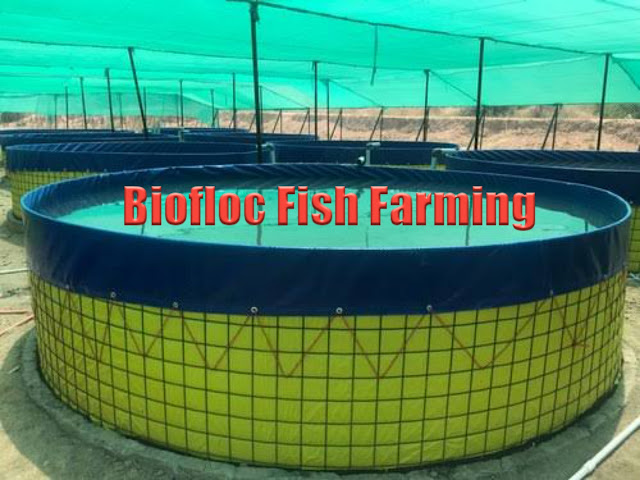 What is Biofloc
The Biofloc system was developed to improve the environmental control of aquatic animal production. In aquaculture, the factors that most influence are the cost of food (which represents 60% of the total cost of production) and the most limited availability of water / land. High density livestock and aquaculture require wastewater treatment. The bioflock system is a wastewater treatment that has acquired a vital importance as an aquaculture approach.
The principle of this technique is to generate a nitrogen cycle by maintaining a higher C: N ratio by stimulating the growth of heterogeneous microbes, which accommodate nitrogen waste that can be exploited by spices grown as food. Biomass technology is not only effective in the treatment of waste but also in the feeding of aquatic animals.
The higher C: N is maintained by adding a source of carbohydrates (molasses) and improving water quality by producing high-quality single-celled microbial protein. In such a situation, dense microorganisms develop and act as a bioreactor that controls the quality of the water and the food source of the protein. The freezing of toxic nitrogen species occurs faster in biomass because the growth rate and microbial production per unit of heterogeneity substrate is ten times higher than that of self-fed nitrophobic bacteria. This technique is based on the principle of flocculation within the system.
Bioflock technology has been applied to shrimp farming due to its usual lower habitat and resistance to environmental changes. Studies were conducted to evaluate larval growth and reproductive performance of shrimp and Nile tilapia. Improved reproduction performance was observed in shrimp raised in the bioflock system compared to normal culture practices. Likewise, an improvement in larval growth performance was observed.
Composition and nutritional value of biofloc.
Biofloc is a homogeneous group of suspended particles and a variety of microorganisms associated with extracellular polymeric materials. It is composed of microorganisms such as bacteria, algae, fungi, invertebrates, waste, etc. It is a protein-rich food that is formed as a result of converting unused food and waste into a natural food in the culture system when it is exposed to sunlight. Each block is held together in a loose mucus matrix secreted by bacteria and linked by filamentous microorganisms or electrical attraction. Large flows can be seen with the naked eye, but most are microscopic. The flow size varies from 50-200 microns.
A good nutritional value is found in biomass. The weight of dry protein varies from 25 to 50 percent, and fats vary from 0.5 to 15 percent. It is a good source of vitamins and minerals, especially phosphorus. It also has an effect similar to probiotics. Dry biomass is proposed as a component to replace fishmeal or soy in the food. The quality of the food is good. However, there are only limited qualities available. In addition, the effectiveness of commercially producing and drying biomass from biomass is a challenge.
Benefits of the Biofloc Culture System
Disadvantages of the bioflock technology